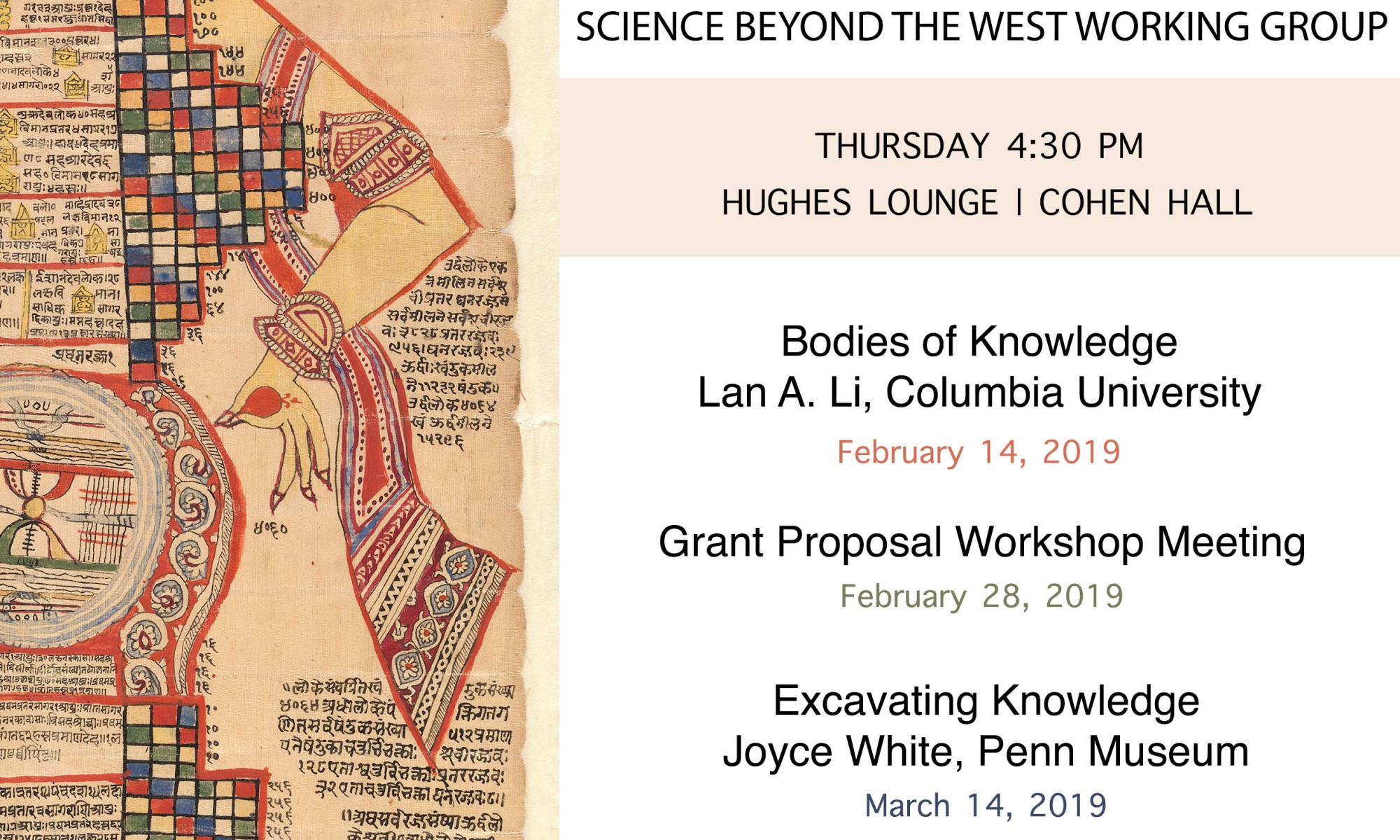 Lunch and discussion with Professor Warwick Anderson and Sebastián Gil-Riaño before the Monday workshop on April 22 at 12 noon in Cohen 493.

We will be reading their papers from the recent workshop on “Postcolonial Tensions: Sciences, Histories, and Indigenous Knowledges”.

April 4 – Reading Against the Grain with Debjani Bhattacharyya, Drexel University

Dr. Bhattacharyya, Assistant Professor of History at Drexel University, is a historian of law, economy, and the environment in South Asia and the author of Empire and Ecology in the Bengal Delta: The Making of Calcutta, published last year by Cambridge University Press. She will be discussing how she works with colonial records, especially cartographic materials, in her own research to understand representations of space at a particular time. To facilitate the conversation, she has generously shared a short (3pp.) excerpt from a report on Bengal’s rivers and a pair of maps produced by a London cartographer and NASA, respectively, as well as a visual essay by Gautam Bhadra entitled “Pictures in Celestial and Worldly Time: Illustrations in Nineteenth-Century Bengali Almanacs,” from New Cultural Histories of India: Materiality and Practices (2014).

Papers by Sumiko Hatakayama and Claire Sabel will be precirculated

An archaeologist of Southeast Asia, Dr. White is a Senior Research Scientist at the Penn Museum and Executive Director of the Institute for Southeast Asian Archaeology. She will be speaking with us about her decades of work in archaeometallurgy conducted at the Ban Chiang Archaeological Site in Northern Thailand, and the problems that arise when Western paradigms of civilizational progress affect the interpretation of findings. She has shared the three attached readings, and suggested any attendees choose one and look for any passages that grab your attention. The meeting will begin with an overview by Dr. White and then move into discussion of the following texts.

February 14 – Bodies of Knowledge with Lan A. Li, Columbia University

Dr. Lan A. Li is a comparative historian of the medicine and the body, as well as a filmmaker. She is currently a Presidential Scholar in Society and Neuroscience at Columbia University.

We will be reading two short pieces: “The Imagination of the Body and the History of Embodied Experience” by Shigehisa Kuriyama (2001) and “Visceral Archives of the Body” by Zeb Tortorici (2014). Both are attached to this email. We will be discussing ways of knowing the body through thought, feeling, and experience in non-Western traditions and contexts. Dr. Li will also share her insights from teaching her course for Spring 2019, “The Body in Global Histories of Medicine.” We will have copies of the syllabus available at the meeting, as well as a schedule of upcoming Science Beyond the West events. Finally, we include a link to Dr. Li’s related curatorial project “Metaphors of Mind.”

A paper by Professor Sebastián Gil-Riaño will be pre-circulated

Dr. Judy Kaplan will be discussing methodological and linguistic challenges of working across different languages including the tensions between pressures to train efficiently(with limited time and resources to fulfill language requirements in grad programs) and to ‘go global’ (where language access is at issue, and learning languages takes time); whether and how to pursue collaborative publication strategies; different sources for accessing linguistic worlds; and other exciting questions of science and translation—what technical terminology, disciplinary and period comparisons are translatable?

Professor Harun Küçük will be discussing pedagogy, metanarratives, and his short piece on teaching history of science 101 from the December 2016 issue of Isis. Note that this piece was part of a larger Viewpoint section in Isis on Frans van Lunteren’s proposal for a machine-based “Big Picture” narrative in the history of science, which appeared in the same issue.

October 19 – Science and Medicine in Tanzania with Steven Feierman, Penn

Professor Emeritus Steven Feierman will be discussing his article “Explanation and Uncertainty in the Medical World of Ghaambo” and his chapter with John M. Janzen “African Religions” in Science and Religion Around the World, and the intersections of health and healing, science, and religion in Africa. Professor Feierman has also agreed to reflect on his experiences of teaching histories of health, healing, and science beyond the West.

October 9 – Science and Medicine in China with Nathan Sivin

Professor Emeritus Nathan Sivin will be discussing his article “Why the Scientific Revolution Did Not Take Place in China—or Didn’t It?”

Join us for a discussion of the idea of “non-Western” and “Western science”.